Branding is exciting! You’re essentially approaching a blank canvas and Jackson Pollock-ing how you want to represent yourself and your enterprise all over it. Some things stick, some things don’t, some things last, some things won’t.

As we do a lot of branding work here at MCQUEEN Creative, we wanted to explore Brand Sustainability using an unconventional form—music.

A brand can become fairly intangible. To define it in the simplest terms, it’s what your audience comes to expect of you. It can easily be mistaken for a logo attached to your name and equally equated to how people come to perceive you. You might even say it’s…your sound.

Flashback to 1968. Enter Led Zeppelin. A group of young English lads in a basement trying to make the most of their talents. Their trajectory to fame is widely known and their initial marketing strategy was great! Iconic symbols, very few photos and their fourth album, popularly known as Zeppelin IV didn’t even have a title. Was the anonymity bold? Yes. Intentional? Who knows. But if a person wanted to hear/see Led Zeppelin back in the day, they had to either buy the album or go to a concert.

Enter their branding. Robert Plant’s high flying vocals, roaring guitar rips from Jimmy Page, the impeccable rhythm of bassist John Paul Jones and drummer John Bonham’s epic drum solos became the attraction. Their first four albums were released within four short (or probably long) years. Albums went platinum, and they became one of the most prolific sounds—or brands—of the century. We’ll spare you the entire history and discography of Led Zeppelin, but it’s fair to say that what they’d achieved was perhaps so iconic, it was unsustainable.

Enter brand sustainability. It’s a difficult challenge for people and companies to overcome if they’ve created something so emblematic there’s no room for change. Adapting not only to the nature of the communities you interact with, but physical ability is something to take into consideration as well! Robert Plant, in his later solo endeavours, did appear to accept that his former androgenious look and distinct vocals just weren’t going to fly as high as they used to. His albums with bluegrass singer Alison Krauss suggested a personal rebrand—something Led Zeppelin was not able to maintain, even prior to the death of drummer John Bohman.

Now, if you wanted to contrast this entirely, you could take a look at musical franchises—KISS, The Phantom of the Opera, and the lesser known pop-metal band Ghost from Sweden are some examples. One thing all of these acts have in common is spectacle. From painted faces, to a “shattered chandelier”, to the ever evolving persona from Ghost’s frontman Tobias Forge who creates a new character for every album.

In various interviews, Forge states that he got into music late in the game, and wanted to remove his ego from the stage. He felt as though he personally didn’t deserve the fame, but the characters he fabricated did. The Faceless Ghouls (aka his bandmates) were also a brilliant design. Wearing highly conceptualised masks that, well, hide their faces creates a great branding technique. The audience isn’t necessarily expecting a specific person onstage. They’re expecting masked musicians—making band members easily replaceable if they feel the need to move on.  As long as the sound is cohesive with their former albums, Ghost is golden. The same can be said for The Phantom of the Opera. While the die hard fans might compare the vocal talents of the roles’ originators against a newer cast, they ultimately show up to see the entire production. It can be argued that this is hiding behind branding, but it’s definitely created a sustainable marketing technique.

Is there a right way to brand? Of course! Consider your values, your audience and be sure to deliver. Consistency is a key factor, but there’s always room for adjustments. With a changing market it’s important to grow along with your audience and your abilities! Showing a little bit of vulnerability in your brand is a positive response to the growth of your company, clients and—dare we say—ourselves. 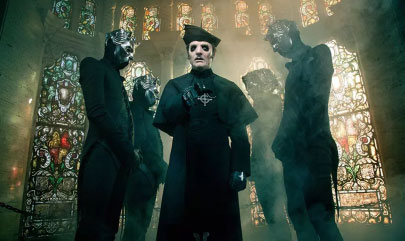