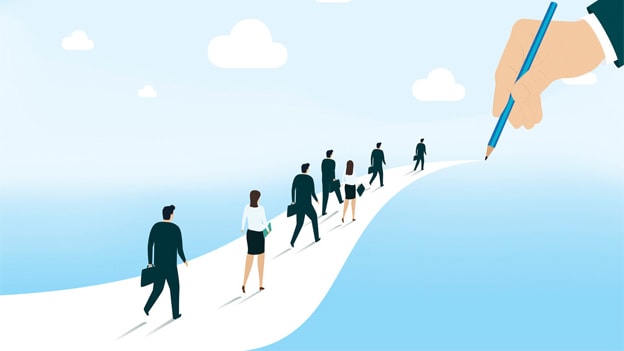 This blog has recurrently discussed the importance of competitive advantage. At MCQUEEN, a strength that is evident to every person on our team is leadership, specifically, the leadership of our CEO, Jared.

We should mention that this is not Jared ‘pumping his own tires’ – this opinion is shared by the team, and is something we wanted to share with all of you. As such, this post has been written by the MCQUEEN team, with permission to share some of Jared’s personal anecdotes to add some colour and nuance.

With a creative background dating back to when he was four, it should be no surprise that

Jared has found his passion leading a creative agency. Jared is a resilient leader and never

companies including Starbucks, Ticketmaster and the Home Depot. His extensive background in human resources and business strategy helps our clients translate ideas into realities. His passion also extends to his work in the community as a mentor, leader and lending his time to philanthropic endeavours, including as the current President and Chairman of the Board for Theatre Network.

Every Monday morning, we have a team meeting. We discuss projects, events, and pop-culture, but beyond that Jared always makes a point to acknowledge the wins over the past week. Whenever somebody makes a successful move, big or small, Jared personally recognizes it and ensures the team does as well. Regardless of the magnitude of this win, big or small, every positive action moves us forward, and that is what matters. It can be confidently assumed that the recipient always feels good, and this ultimately motivates the team forward into the upcoming week.Acknowledging wins, and the efforts of all team members creates momentum.

But where did he learn this? Apparently in junior high school, below from Jared:

In grade 8, I wanted to play basketball, not just junior men’s ball, but senior. I went to the try-outs and worked harder than I ever had. I tried and pushed myself each day and as each round of cuts came, I was still hanging in. Finally, it was decision day, the list was posted…and I was…CUT. I couldn’t believe it. I had worked so hard. I went to see the Coach after class and asked him if I could practice with the team to get better. I implored him to allow me to keep practicing, even though I hadn’t made the team. I knew if I was ever going to get better I had to keep practicing. Reluctantly, he allowed me to continue, making it very clear that I was only to practice and that I was NOT on the team. Thrilled with his decision, I continued to attend practices, I worked even harder than before, I was the first one on the court and last one to leave. Our last practice before the season started I arrived early to find the entire team already there, changed and standing at center court. Panicked, I began apologizing for being late, and the Coach called me to center court. He told me the season was starting and they didn’t have room for someone not on the team to practice any longer. As I was about to turn to leave, the Coach told me the team had voted and decided I deserved to be on the team; he handed me a jersey and told me to get changed. I will never forget the kindness Coach showed me and the invaluable lesson that came along with it.

Constructive feedback sounds trite, but it is under-utilized.

Management often loves to give feedback without providing a blueprint for how to move forward. That’s because it’s the hard part. It is very easy to tell somebody what they’re doing wrong, but offering them some solutions to fix an issue requires more brain power and bandwidth.

Acknowledge wins, but also offer constructive criticism when work is not up-to-par. Don’t accept poor work, but don’t deprecate the individual – help them grow. This is how you level your team up. It is a leader’s responsibility to guide their team in the right direction. Lead by example; focus on self improvement and ask for their feedback as well. Make it a two-way street.

Build self improvement into your culture, and watch your team grow.

MCQUEEN is an eclectic bunch. We are writers, musicians, and theatre lovers. We are cooks, photographers, and foodies. We have studied in diverse areas like eastern European studies, finance, and arts management. It goes without saying – we are diverse.

This is by intentional design. Being different, and being yourself is encouraged here.

Jared recognizes he is not a god. He does not have all the answers, and looks to his team for help. Bringing as many perspectives to the table as possible, the solutions that our team comes up with are often contrarian, challenge the status quo, and make you think. This is special in an industry which often uses memetic strategies. The more perspectives you include, the less likely you are to have blind spots. Blind spots kill.

A diverse team is interesting. How boring would it be if we were all the same?

So when did this click for Jared? Let’s hear from him:

When I was in the fifth grade, I knew that I was gay. I realized that meant I was different from most of my friends. It’s hard to be a kid and realize you’re different.

That you can’t really be yourself, so I decided I had to be a better version of me. So I played sports, I volunteered, I gave back to the community – I somehow hoped those things would offset this burden of being different.

The thing about being different that you have to understand is that it is a gift. Once I started to realize through my pursuit of over-achievement, that being gay and just being me, was okay, everything changed.

Everything got better. Actually, way better than okay.

Jared does not put up with unjust rudeness.

He will protect the team from those who are rude, abrasive, or angered. He acts as the primary contact – MCQUEEN’s shield.

He does this by taking ownership of mistakes.

It is a form of extreme accountability for his team.

If a team member has done what they were told to, they should not be hung out or dressed down. If something has gone wrong, Jared takes responsibility as a leader. That’s not to say he does not expect the team to take ownership of personal mistakes, but as CEO he recognizes the need to accept the burden of responsibility.

Perhaps the goals were not actionable, or laid out clearly enough.

Perhaps there was a fault in communication.

Perhaps the team member didn’t understand the “why” behind the activity, and focused on the “what”.

Or perhaps, a teammate is being taken advantage of unfairly.

The last of which Jared has little tolerance for.

All of us solve problems very differently. Some of us think inside the box, others outside. Some prefer to work purely digitally, others enjoy the tangibility of pen and paper.

Jared recognizes this. He gives us the tools that we need to succeed, and then allows us the autonomy to solve problems as we see fit. It falls into the domain of our own responsibility. This simple act has created an incredibly self reliant team, with a strong sense of self respect. Additionally, it frees up Jared’s calendar and allows him to focus on his own responsibilities.

I had many pivotal moments in my career, but early on I determined that I often work through problems in different ways than most. I carry that forward in my management style, because – who am I to tell somebody how they operate most effectively? It’s a completely subjective practice.

Give a Damn About Your People

He sends snacks to interns during exam season.

He sends handwritten cards to clients.

He engages people and asks about their interests.

This is earnest, and comes from a place of honesty. He simply values people and relationships. He does it because he is a good person, but that’s not to say that there aren’t secondary benefits.

A team that is cared for and feels heard is a tight knit team.

Tight knit teams work better: they don’t carry stress from toxic relationships into their work, they are more efficient, they produce higher quality work, and they are happier. There is a distinct lack of resentment towards work, as it blends seamlessly with the rest of their lives.

Give a damn about your people and everyone benefits.