In 2006 the scientific community witnessed what could be described as a paradigm change. That being said, if the common outsider wasn’t observing carefully, it was easy to miss. A landmark study from John Hopkins Medical showed incredibly optimistic results on the therapeutic potential of psilocybin, the psychoactive substance found in ‘magic mushrooms’. To recreational users these results were no surprise, but this was a peer reviewed, controlled variable, double blind, scientific study carried out by the respected psychopharmacologist R. R Griffiths. To be blunt, this was huge. There had been little research since the moral panic of the 1960’s. Studies on psychedelics were put to a halt and forced underground without government support. Since Griffith’s 2006 study, a multitude of legitimate studies have been conducted on other psychedelic substances including LSD, MDMA, DMT, Ayahuasca, and Peyote. What were once ancient medicines, became a stigmatized drug, and are now having a renaissance under the pretense of therapeutic potential. 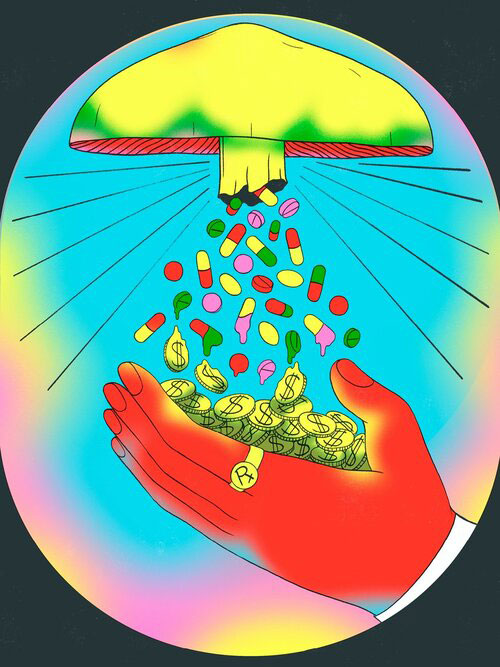 The scientific literature claims that psychedelic therapy has potential to alleviate mental health issues such as depression, addiction, anxiety, and PTSD. Not to mention the anecdotal discussion regarding ‘transcendent experience’ which is infallibally more difficult to quantify or prove. For the last 10-15 years, the acceptance of these substances have been in an incubation period, popularized by Silicon Valley leaders like Tim Ferriss, medical researchers, and the ever popular Joe Rogan. The positive research and publicity have even caused Wall Street to take notice, with new psychedelic IPOs every year.  The COVID-19 pandemic has been the perfect storm for this industry to explode – mental health issues are increasingly pervasive. The combination of pop-culture and deteriorating societal mental health has created a demand, and industries are now looking to new methods for help.

Yet, we’re not here to discuss the viability of this investment. Countless more qualified sources have speculated on this. This article is concerned with the issue of the marketing, and strategy of bringing these substances to market.

One of the characteristic descriptions of the psychedelic experience is that the individual is unable to describe it. They can’t ascribe words to it – it’s ‘ineffable’. Yet, perhaps we’re not looking at this problem right. In his novel ‘How to Change Your Mind’, New York Times investigative journalist Michael Pollan suggests that the experience is not ineffable, we just haven’t explained it in the right way, or we don’t have the right vocabulary to deal with it. He tells the reader to imagine a neanderthal being transported to modern-day New York City. If you asked that neanderthal to explain what they saw, they might mention it was “big” or “loud”, but they wouldn’t have the words to describe skyscrapers, taxis, and advertisements. Pollan asks us to consider the psychedelic experience in this light.

This is an interesting sentiment, and provides what could be the most interesting marketing problem of the 21st century. Marketers will determine how these once (and still really are) stigmatized substances are rebranded. We as marketers will be the ones to ascribe the new words, meaning, and strategy that carry it forward. A critic of this might ask, ‘how is this any different from cannabis?’. Although both cannabis and psychedelics carry stigma, the experience of the latter is described as ineffable. The sensory experience of cannabis is quite easily described by users, and researchers. This is an entirely different issue. They even perplex the Ivy-League researchers who have become fascinated with them.

Another important touchpoint is the psychological phenomenon of the expectancy effect. That is, if an individual expects a certain outcome, the probability of it occurring increases. Our daily experiences are largely a product of our subconscious. Similar to how the music of Jimi Hendrix, or writings of Aldous Huxley shaped the 1960’s psychedelic experience with expectations of mysticism and bliss, if the modern-individual goes into these experiences with expectations of healing, can we increase the success rate of dealing with mental health issues?

As marketers, we are interested in influencing how society observes products. In the 1960’s, society underwent a panic because the narrative was steered in a dismissive direction. The word psychedelics took on a negative connotation, hindering the progress of research by pushing it underground. If the scientific literature holds correct, these substances have the potential to change lives, so it is important the narrative be told in the right way.

History has shown us the danger of not having a careful-strategy for releasing such potent medicines to the world. Many blame Harvard researcher Timothy Leary for the downfall of the initial 1960’s release and there is a lesson to be learned from his strategy. Leary attempted to spread the message far as possible, working with icons in music and literature. This deviated from the scientific path, onto a more spiritual mission. Although it started a cultural revolution, it also forced the US government to schedule these substances as illegal, and cut funding.

So, with this in mind, we must be careful. This resurgence must be handled carefully. With a flood of Wall Street investment, public interest, and scientific research, this is the dawn of a new era. It only lacks a distinct strategy and marketing to carry it forward. This is the avenue that we are interested in, and have a number of ideas about. There are no shortage of issues; advertising regulations, and societal stigma to name two, but we are persistent on the fact that there are no problems we cannot solve. Several new startups have been growing in Canada and the US, and we welcome them to reach out for consultation so that we can move forward together.